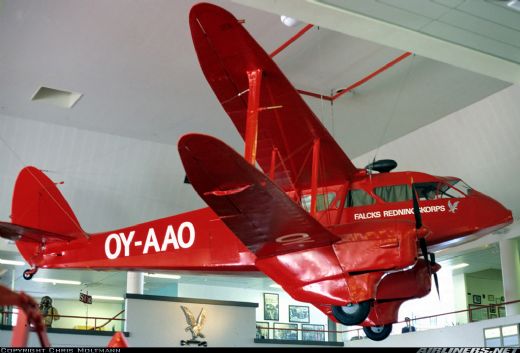 My name is Niels Ove Studstrup born 1936 in Denmark. In 1957 I got my first pilot-licence and in 1958 I started my professional career as pilot at "Falcks Flyvetjeneste" a danish ambulance service, that transportet patients domestic and international. In 1965 I joined "Faroe Airways" as Operations Manager. We operated DC3 and began a regular service between Denmark and the Faroe Islands. For the first time did the Faroe Islands get a year round airservice. The routing went from Copenhagen via Stavanger and Kirkwall at the Orkney Island. It was a great challenge to operate the service on a regular basis and a lot of usefull expierence was gained, which later was very helpfull when Maersk Air took over the operation.  In 1967 Faroe Airways went out of business and in 1969 I returned to Falckair as Operations Manager. Falckair became the foundation for Maersk Air and 1. January 1970 Falckair became Maersk Air and I had the pleasure of participating in building up Maersk Air with its Fokker F27 Friendship fleet.

My frequent visits to the Fokker aircraft factory at Amsterdam opened my eyes for an exiting new aviation world and in February 1975 I started to work for Fokker. This became a relationship that lasted until Fokker stopped production in 1996. My first assignment was one year as instructor pilot with the Imperial Iranian Airforce at Doshan Tappeh airbase in the eastern part of Teheran. It was a great cultural chock to be positioned as an instructor pilot in the middle of an Iranian Airforce Squadron. I was given free hands to set up training programs and I had a busy year with as well domestic flights as international flights from Teheran through Turkey, Greece, Italy and France to Amsterdam.

After Iran I was assigned to the Algerian Airforce at Base Arienne de Boufarik. It was a most interesting job that lasted 3 years, with a short break during which I introduced Fokker Friendship to Air Niger operating from Niamey. At the Algerian Airforce I had to familiarize myself with several, for me, new operational procedures like paratroop drops, formation flying and air cartography. Algerian Airforce had a special cartographic/arial survey version of the Fokker F27 Friendship that was used for search and rescue over the sea and air cartography over land. It was at the early days of INS navigation and we were very impressed by the fact that we could preprogramme i.e.a search pattern which would be automatically flown by the autopilot.

After Algeria most assignment became shorter mostly because flight simulators became more sophisticated and less time had to be spend on aircraft training. One of the longer assignment after Algeria was 8 month at Libyan Arab Airlines in Tripoli. They had bought 3 Fokker F28 Fellowship. We started operation using expatriate pilots and then gradually phasing in the Libyan pilots. We flew a shuttle service between Tripoli and Benghazi and a desert service to various oil producing stations. Internationally we operated services to Tunis, Malta and Rome.

If you click "Mit flyvske liv" at the left menu you will find most of the countries I have been assigned to over the years. One country I would like to accentuate is Burma, now called Myanmar. Over 5 years I spend 1 to 2 months in Burma every year. Burma Airways operated F27, F28 and Burma Airforce operated F27. Burma was rather isolated at the time and the pilots could not go abroad for their reccurent training so the annual proficiency checks had to be done locally in the aircraft. The aircraft were busy during the daytime operating the normal scheduled services so most of the training flights were done at night time. Burma is a facinating country to visit and it was always with great pleasure that I looked forward to my annual visit.

Another rather long assignment was with Bangkok Airways. In 1991 just after the civil war ended in Cambodia Bangkok Airways got permission to operate a service between Bangkok and Phnom Penh. For this service Bangkok Airways wet-leased a Fokker F100 and I was assigned as chief of the operation. It was a very interesting operation especially the first couple of months because the Air Traffic Control for the whole of Cambodia, was limited to one local controller situated at the control tower at Phnom Penh airport. He had a simple VHF radio connected to a car battery. However, he did a great job and we never expierenced any critical situations in the air. The parking ramp at Phnom Penh on the other hand gave us a problem one day when our main wheels sank through the concrete. We did not find many tools to lift the aircraft up but after 7 hours of intensive work we were able to take off again for Bangkok. You find pictures under "Cambodia" at  the left menu.

Over the years I did many interesting ferry flights. Two of the longest  were from Uruguay to Amsterdam and from Amsterdam to Christchurch in New Zealand. Uruguay Airforce had a very old Fokker Friendship with Dart 6 engines they wanted flown to Amsterdam for a major overhaul. They had no permission to overfly Brazil so we had to cross the Andes Mountains to Santiago in Chile and further refuelling stops at Antofagasta, Lima Peru, Cali Columbia, Curacao, Sint Martin, Bermuda, Halifax, Goose Bay, Sdr. Strømfjord Greenland and Reykjavik. The other long ferry flight was also a Fokker Friendship. We were 2 pilots and a mechanic and we made stops at Brindisi, Athens, Cairo, Jeddah, Seeb, Bombay, Calcutta, Bangkok, Singapore, Jakarta, Bali, Darwin, Mt. Isa, Brisbane, Norfolk Island and finally after 12 days and 54 flying hours we landed at Christchurch New Zealand. It should be added to the story that after 2 months when the overhaul was completed we flew the aircraft back to Amsterdam.

I had the pleasure of participating in the introduction of Fokker Fellowship F28 at USA. Fokker sold F28 to Altair in Philadelfia and to Empire Airlines in Utica upstate New York. I went to Empire Airlines and since it was the first time F28 had be registered at USA we had to demonstrate that the aircraft could be evacuated in less than 90 seconds, with a full load of passengers (85), in case of an emergency situation. It was an interesting exercise and when we did the test for the authorities we managed to get everybody out in 72 seconds. We operated flights into JFK, La Guardia, Newark and Washington DC and for me it was a great experience to fly in the USA. Later I was assigned to other operaters in Illinois, Florida, Michegan, Wisconsin, Vermount and Pennsylvania.

My last assignment as a flying Fokker instructor pilot was at AVIANOVA airlines at Italy. My last flight as a route instructor was on 24 January 1996 on a Fokker F70 from Venice to Madrid and return.

In the spring of 1999 I was contacted by a french aviation consultancy company who had a training contract with the Dornier Aircraft factory at Oberpfaffenhofen near Munich. The new type Dornier 328-Jet had been sold to China and they needed instructor pilots to train chineese pilot at the simulator. I did my type- conversion on a prototype at the factory at Oberpfaffenhofen and on 25. August 1999 I got the type on my dutch licence. During the following 3 years I trained many chineese pilots from Hainan Airlines. It was a very interesting excecise because it all went through an interpreter, which to my surprise did not create any problems, not least because the interpreters were very professional. In 2000 I also got the type on my american license because I had to train pilots from the American company Atlantic-Coast. Parallel to the Dornier training I continued to work as a simulator instructor on Fokker F70 and F100 at the CAE training centre at Amsterdam. In 2008 and after more than 50 interesting years in the flying business I retired to my deerfarm in Denmark.

Or it would be more correct to say semi-retirement, because since 1999 I have participated in the development of a tool that will help pilots to better decisions regarding de-icing of aircraft. After more than 10 years of testing and millions of dollars spend on development. Today units are operative in Canada, USA and several airports in Europe. You can see more about the system at www.surewx.com

Over the years I have worked with hundreds of pilots from all over the world  and it is a great pleasure to receive news from some of them via email. If you are one of the pilots I met on my way, I would be pleased to have a word from you on nstudstrup@hotmail.com .